October 13th through October 19th, 1952, was designated “Pennsylvania Week” by the Commonwealth of Pennsylvania Department of Commerce. A special 16-inch transcription disc, featuring civic announcements from sixteen famous Pennsylvanians was prepared and distributed to radio stations. The disc was prepared through the facilities of WFIL, Philadelphia, and pressed by RCA. We did not know about this disc in time to include it in Jimmy Stewart on the Air, and all the information here is new.

We have searched for this disc for several years with no luck. Finally, a copy was located in the Marr Sound Archives of the Miller Nichols Library at the University of Missouri – Kansas City. Mr. Charles J. Haddix of that library was kind enough to allow us access to the audio of Stewart so that we could at least transcribe it for you here.

Here is the text of Mr. Stewart’s one minute announcement:

“Hello everybody, this is Jimmy Stewart. You know, I was born and raised right here in the Keystone State and I’d like to join my neighbors in celebrating Pennsylvania Week; It’s October 13th to the 19th. This is one week out of the year when we ought to take time out to look around. And, in a state like Pennsylvania, we can find lots of things to be proud of. I don’t know whether you know this or not, but our state has the largest rural population of all the States. We sell more poultry than any other state; our farmers raise every crop grown in the United States except citrus fruits, cotton and peanuts. And don’t forget food in times like these is very vital. Yes sir, in this way and in a lot of other ways, Pennsylvania defends freedom, helps keep America strong. And now during Pennsylvania Week, we ought to remember this and rededicate ourselves to the job of citizenship in this great state. It’s our Pennsylvania, now let’s keep it growing.”

We have finally located a good quality audio of Stewart’s PSA and we’re adding it to this original posting for you to enjoy. (May 28, 2017)

If you remember that in 1952, the United States was in the middle of the war in Korea, as well as a “cold war” with the communist nations of the world, you will better understand Stewart’s remarks about Pennsylvania defending freedom and helping to keep America strong. Below are just three of many ads appearing in the October 16th edition of the Bedford Gazette, Bedford, PA. They all reflect that same sentiment. 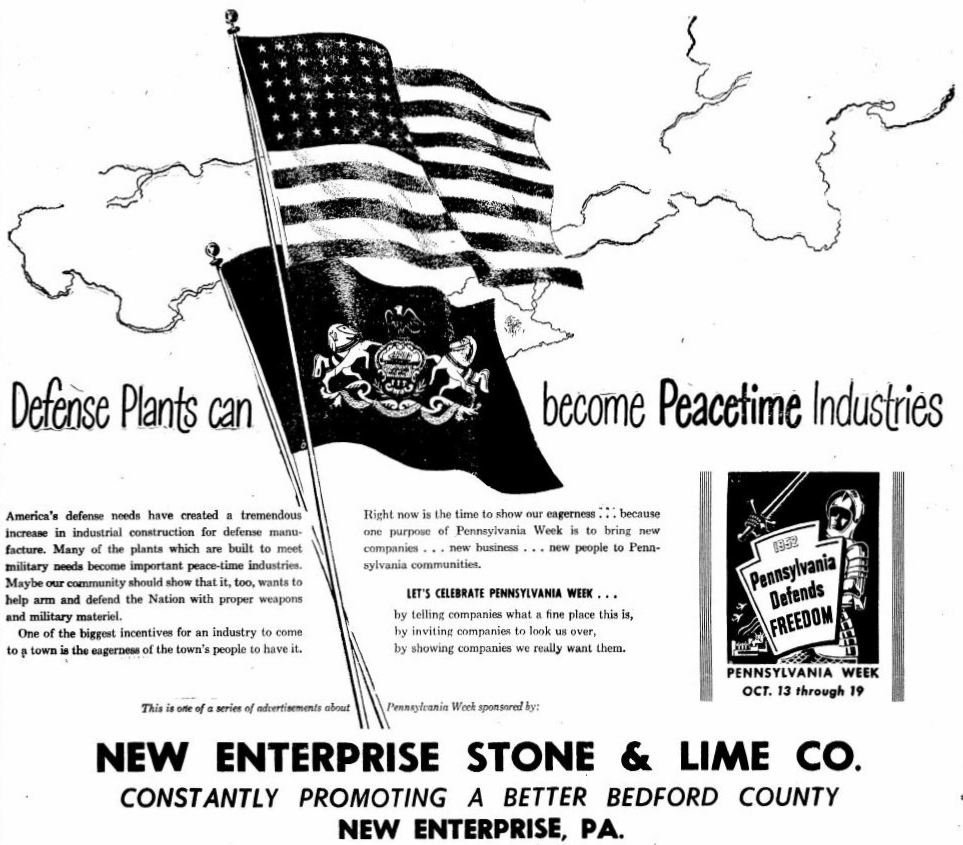