When I saw this record come up for sale on Ebay, I was very excited. We knew that a five part story on Stewart had appeared in the Saturday Evening Post beginning on February 11, 1961 (Vol. 234, No. 6) through March 11 (Vol. 234, No. 10). Stewart’s name appeared prominently on the record label and it was reasonable to believe that the record featured clips from Stewart’s interview. 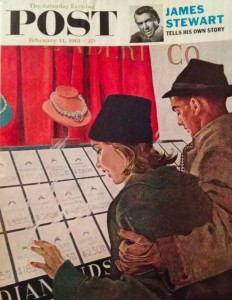 We won the auction and soon the record arrived. A scan of the label appears below: 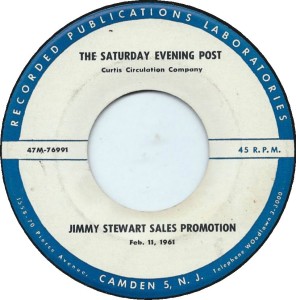 When I placed the record on my turntable and began to listen to it, any and all excitement soon disappeared. Pete Martin, the man who wrote the articles, is heard first and talks about interviewing Stewart. Then he introduces Stewart. From the very first word it is quite apparent that the voice  was not that of Jimmy Stewart. It wasn’t even a very good imitation. To his credit, Martin does identify the voice as that of an imitator, but claims he is speaking the sames words that Jimmy spoke during his interview with him.

The record ends with sales manager G.B. McCones talking to dealers about the  high sales possibility for these five issues and the things that the magazine is doing to promote those sales.

It is interesting listening, even if Stewart himself was not involved.