Sealtest Village Store was also sometimes known as The Jack Carson Show. Eve Arden was his co-host. Stewart made his second appearance as a guest star on March 4, 1948. The show is not available.

The newspaper ads for the show were varied. Some, like this one from the Wisconsin State Journal, Madison, WI, were very simple.

The next ad, placed by station WOW, had seven evenings worth of listings. It is from the Daily Sun, Beatrice, NE. Check out Thursday’s entries for this show.

This final ad is an interesting one. The show was sponsored by Sealtest and this ad for its Butter Pecan fudge tarts is from the Evening Sentinel, Holland, MI. 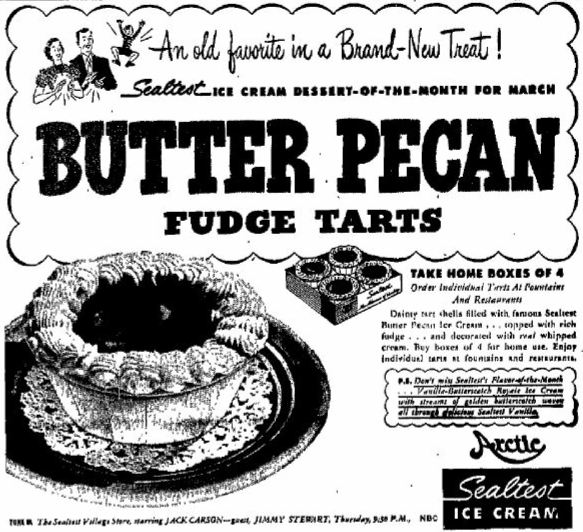 At the very bottom of the ad, you’ll see a blurb about the show and guest, Jimmy Stewart.

Here are two newly found listings for this program. The first is from The Miami News, Miami, FL, and adds some new information about Stewart’s appearance. According to the ad, he would be talking about the filming of Call Northside 777.

The second listing is from the Democrat and Chronicle, Rochester, NY.