The Pittsburgh Post-Gazette, Pittsburgh, PA, printed a story about the show on the day of the broadcast. It mentions that Jimmy Stewart and John McIntire would appear in a skit in the program. The quality of the scan is not as good as it could be, but it is readable. 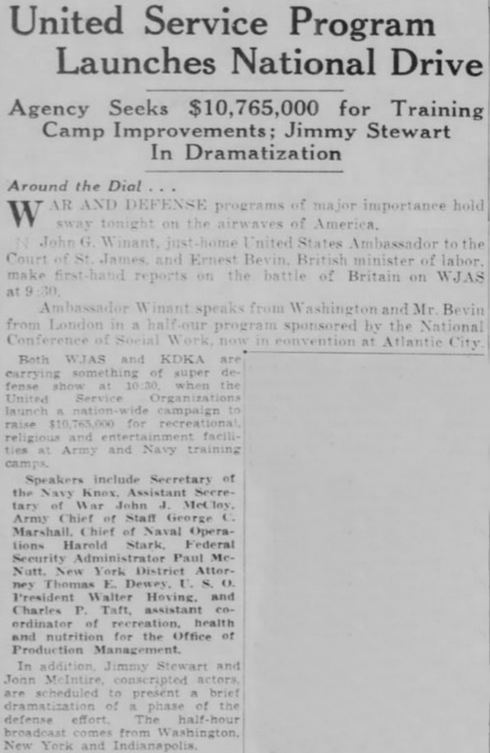 The following article is from The Daily Mail, Hagerstown, MD. It is better quality, but does not mention Stewart. 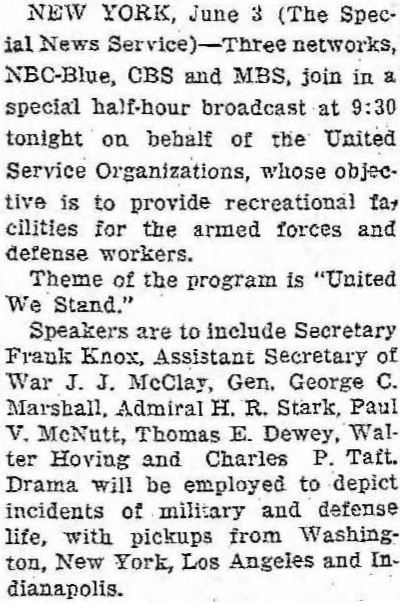 The program is not generally available, but is a part of the NBC Collection at the Library of Congress.

The program begins with a short skit involving a new recruit and an Army old timer. The recruit is complaining that there is nothing to do in town.

Admiral Harold Stark and Chief of Staff General George Marshall talk about how widespread this type of problem is in both the Army and the Navy.

In the next skit, a sailor can’t find his girlfriend in the mob at the dock. He looks all over town for her, but they never find one another. If only there were a place they could have gone to meet.

Admiral Stark and General Marshall are joined by Secretary of the Navy Frank Knox and more of the problem is outlined.

The next sketch is about the conditions in the small towns in which defense workers now have to live. Not being natives of the towns, they are reluctant to venture into the downtown area. When they do, they are treated badly. At a bowling alley they must wait three hours to bowl and then pay 25¢ per game, while townspeople only pay 10¢. They can’t even buy ice cream or a soda as these are being held for townspeople only.

Assistant Secretary of War John J. McCloy speaks next, telling listeners that they have a common spirit as they are all working for the defense of the country. The announcer, Bob Trout, says that the USO has been formed to help the situation. The remainder of the show will outline the mission of the USO.

Mr. Walter Hoving, President of the USO, is the next to speak. He says that the USO has been around since World War I, but now many of the problems have been corrected. He also says that the other groups involved in the USO are the YMCA, YWCA, National Catholic Community Service, Salvation Army, Jewish Welfare Board and National Travelers Aid Association. He then introduces Charles P. Taft, Assistant Coordinator for Health, Welfare and Related Defense Activities of the Federal Security Administration. He says that the government will equip more than 250 USO clubs around the U.S., but that citizens must help to keep the clubs open and running well.

Bob Trout now introduces Thomas E. Dewey, National Campaign Chairman, for the USO. It will be his job to raise the $10,765,000 needed to do all of this. He asks for full cooperation from all Americans. He knows, “Every American will do his part.”

In the skit that follows, we hear from the new recruit again. This time he has just returned from town and is telling his sergeant that the new USO will soon be opening and things will be much better.

Trout introduces Paul V. McNutt of the Federal Security Administration who reads a letter from President Roosevelt, who thanks all for the success of the USO campaign.

“My Country ‘Tis of Thee” plays as the show comes to an end.