The 4th annual Sports Award Show of the Los Angeles Times was held on Monday, December 27, 1948, at the Ambassador Hotel in Los Angeles. The show was broadcast by the Mutual Broadcasting System from 10:30 to 11 p.m.

The show is not available and all that is known about it has been gathered from newspaper listings. All the listings located have much the same information as this one from the Anniston Star, Anniston, AL: 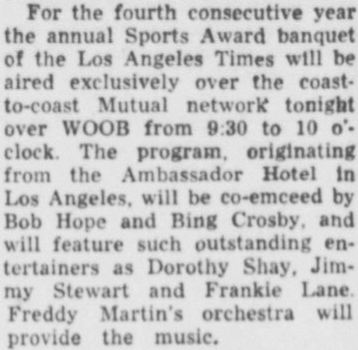 As you can see, the program was to be co-emceed by Bob Hope and Bing Crosby. The Freddy Martin Orchestra was to supply the music. Besides Jimmy Stewart, the guests list included Dorothy Shay and Frankie Laine (misspelled “Lane” in most listings).

At least one newspaper, the Newark Advocate, Newark, OH, said that Hope was not going to be able to attend and that Danny Kaye would be taking his place.

Some listings stated that there would be “many sports stars” at the banquet, but none were named.