To mark the first anniversary of the United States Air Force (formed September 18, 1947), NBC broadcast a 30-minute radio special on September 16, 1948. The show was produced and directed by Jack Lyman. The announcer was Hal Gibney and Henry Russell directed the chorus and orchestra. The program is not in general circulation, but is available as part of the NBC Collection at the Library of Congress.

Newspapers advertised the special show this way on the day of the broadcast. The first listing is from the Democrat and Chronicle, Rochester, NY, and the second from the New York Times.

Hal Gibney opens the program with a short history of the Air Force and announces that NBC, in cooperation with the Air Force Association is going to present the play, Slim and the Colonel. Jimmy Stewart would be the narrator, with Hanley Stafford as the Colonel and Peter Leeds as Slim. Others appearing were Charlie Lung, Leo Cleary, Victor Perrin and Johnny McGovern. Although the New York Times listing mentions Lee J. Cobb, he did not appear on the program.

Stewart begins his part of the show with these words.

Ladies and gentlemen, this is James Stewart. I’m going to act as narrator on this Air Force program. But if you think I’m going to do any bragging about what a great Air Force we have, I want to correct that impression right here and now; because between you and me, there isn’t too much to brag about. It was just three years ago, three years and two weeks ago to be exact, that Japan surrendered. Germany had already quit, so that was the end of the war. At that time, we had the most powerful Air Force in the world; an Air Force that could fight and win on two fronts at the same time. We were genuinely proud of that Air Force, you and I…all of us. But what is that American Air Force like today? What is it going to be like tomorrow? What can we expect of it in case of an emergency? Well, let’s try to find out by going back to the year 1945…to an Air Force base in Okinawa, near midnight of a night late in August.

The play begins with sirens blaring to mark the end of World War II. The men are anxious to get out of the Air Force and return to civilian life. Stewart’s narration continues.

Does that attitude sound familiar? Well, it should and I’ll tell you why. When Japan surrendered, the Air Force had nearly two-and-a-quarter-million men. Today, it has barely over 200,000. Now, think that over…our present Air Force strength is roughly only 10% of what we needed to win the last war. The reason? Well, I think it’s largely a matter of the individual men themselves. The pilots, the gunners, bombardiers, the navigators, radiomen — they had a belly full…they wanted out. And they were mustered out at a rate of five to 11,000 a day. And, of course, the men who remained behind, they knew this wasn’t so good. In case of an emergency, it could easily become a national catastrophe. So, they tried to build up the Air Force, but the fight was a losing battle.

The men are now being discharged. The Colonel and Jocko try to talk Slim into remaining in the service like they plan to do, but he’ll have no part of it. Stewart says:

Yes. The men in the Air Force were streaming out of uniform, all right. But the men at the top realized something that perhaps has come to be a kind of corny phrase — that we had won the war, but that we were losing the peace. And that’s why President Truman sent a special message to Congress.

The skit continues with a bit of President Truman’s speech to Congress. He requests that the U.S. Air Force be an autonomous unit, independent of the Army and Navy. Stewart then continues with:

You all know what happened. Congress realized that the threat to this country was too big for them to worry about party lines, even with an election coming up. And so, on July 26, last year, Congress gave the Air Force autonomy as a military force separate from all other branches of the service. Well, now, that was fine as far as it went. The trouble was that outside the armed services, no one paid much attention to what was really going on. We’d won a war, we were at peace and you know how it was. The United States just wanted a long drift back into the soft, pleasant occupations of peacetime, just as if there’s never been a war at all. Just as if there might never be another.

As the skit continues, the Colonel runs into Slim who is operating an airplane ride for kids at a carnival. He tells Slim that times are bad and the Air Force really needs men. Slim begins to weaken. Stewart says:

How do you like those facts? I told you there wasn’t much to brag about and there isn’t. During the war we had around 250 combat groups, now we can’t muster 55. What do you think would happen to those 55 undermanned air groups in case of a sudden attack? What do you think would happen to us? Of course, you hear a lot of people say, “Oh, we got plenty of planes…look at all the ones that were left over from the last war.” Well, I don’t have to tell you what’s happening to most of them and what’s happening to more and more of them every day.

While driving in the desert near Kingsman, Arizona, Slim passes rows of World War II planes being broken down and melted to make new planes. He stops to watch. When he sees his old plane, Big Belly Bertha, being destroyed, it’s the last straw for him. He re-enlists. Stewart ends the skit with these words:

That’s right…why not? Oh, I know exactly how he felt. That airplane meant something to him; it was almost like it had a soul. When he was flying it, he felt safe; he felt like he had something solid under him, something to fight for him, to protect him. But he kind of took that airplane for granted, the way the country takes the Air Force for granted, I guess. He didn’t realize just how much that airplane meant to him until he saw them smashing it up for junk. That made it a personal matter and it hurt him way down deep inside. And, you know, it might be a good idea if the rest of us just kind of made the United States Air Force a personal matter, too. The Air Force is making new planes out of old ones and it’ll build a new Air Force too, but it needs men…and they’ve got to have time.

Hal Gibney gives the closing credits and the show ends with The Air Force Song.

The Air Force Association is mentioned during his program. Mr. Stewart had a role in the formation of this organization. We recently added to our collection and 8-page fold open booklet about the Association. Stewart appears in one of the photos in the booklet and also there is a short military bio for him. 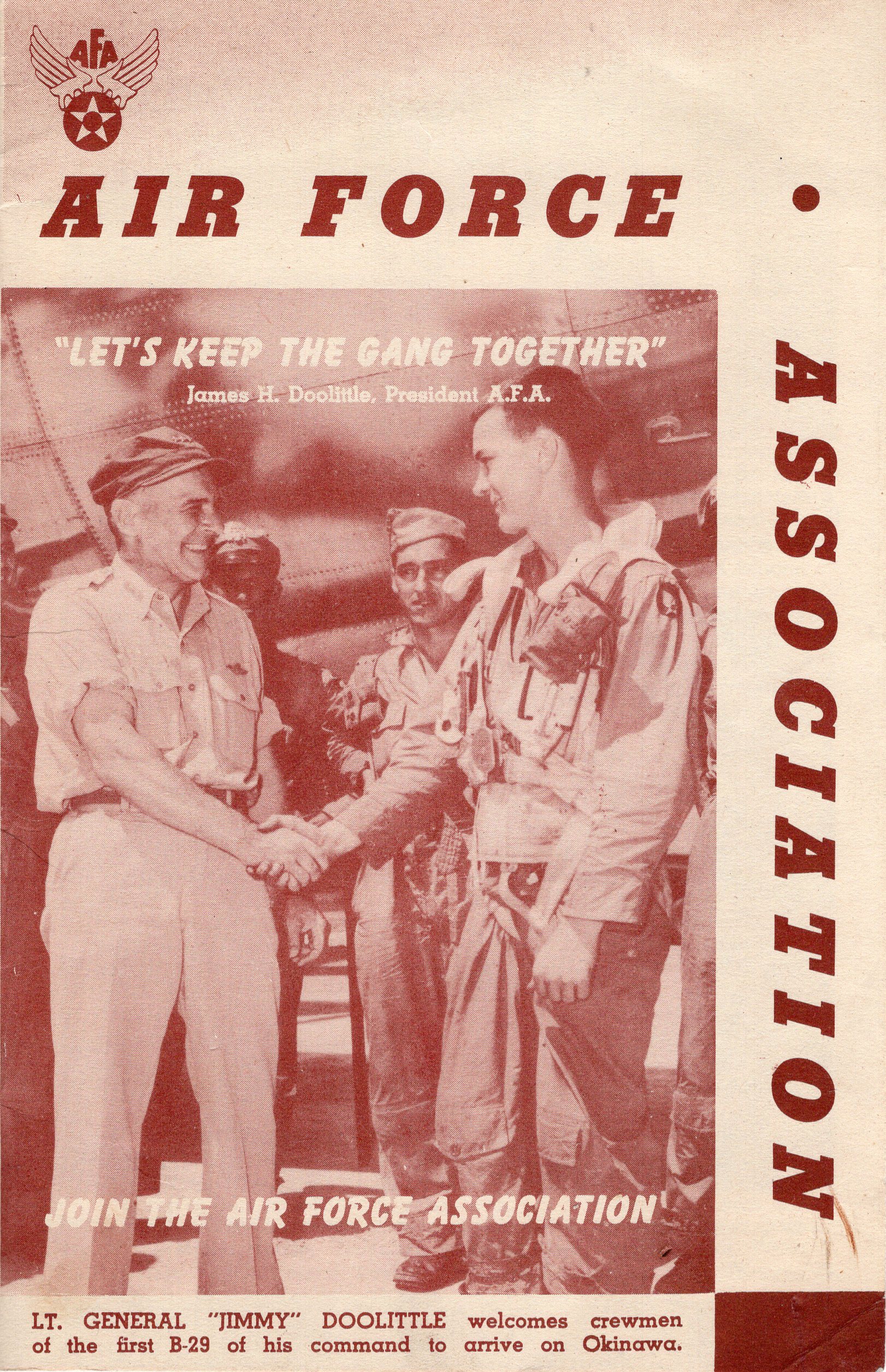 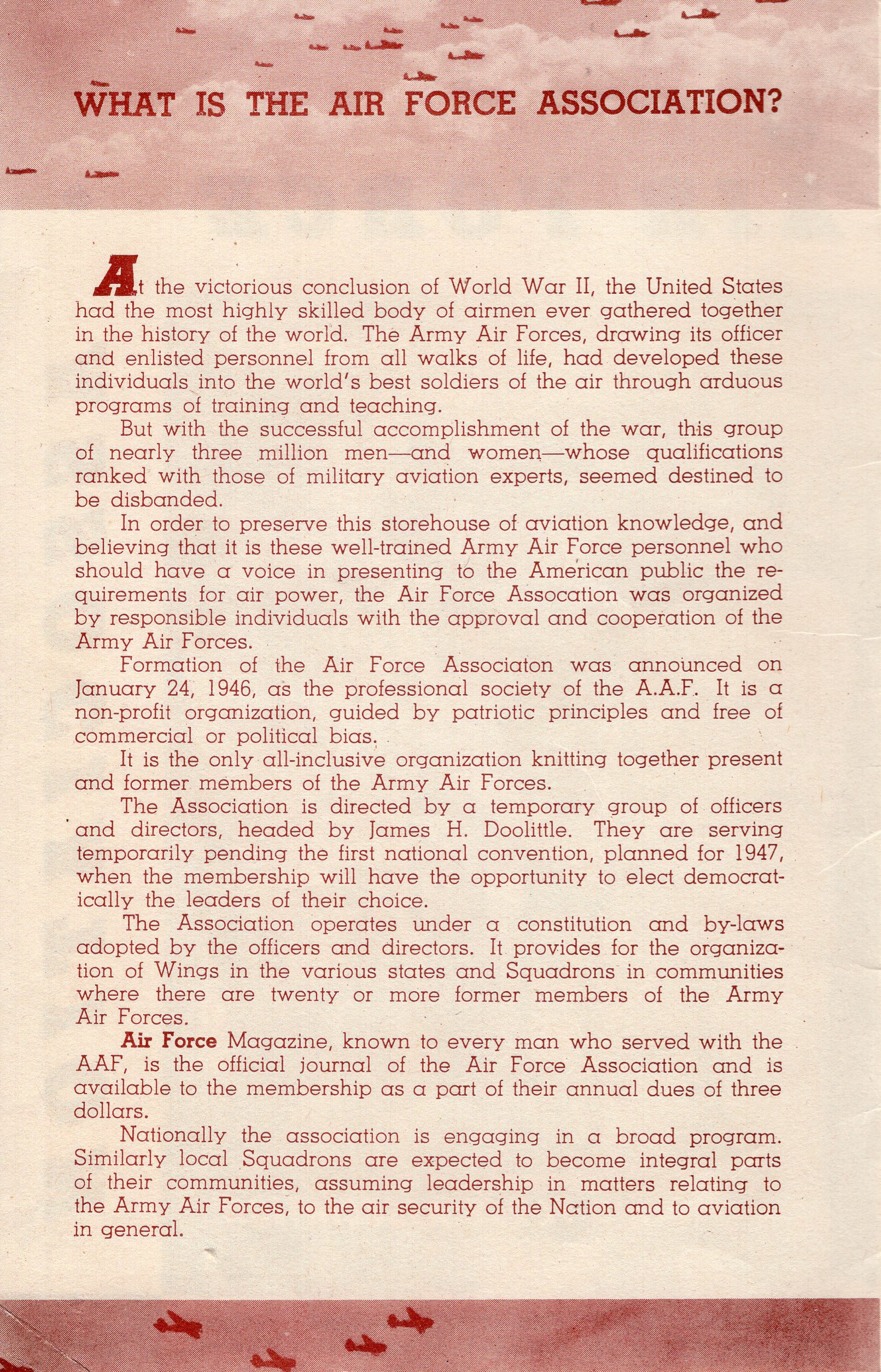 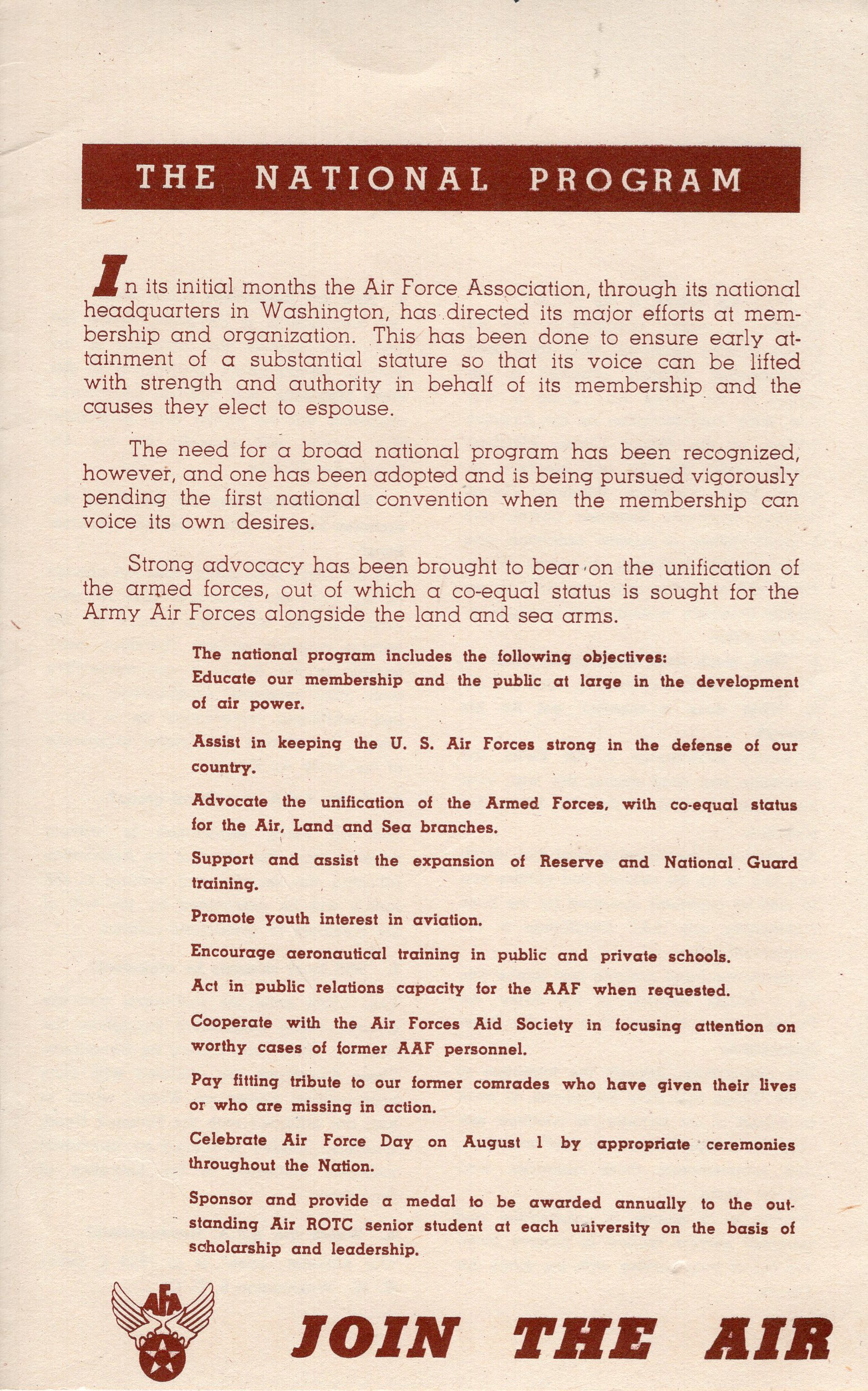 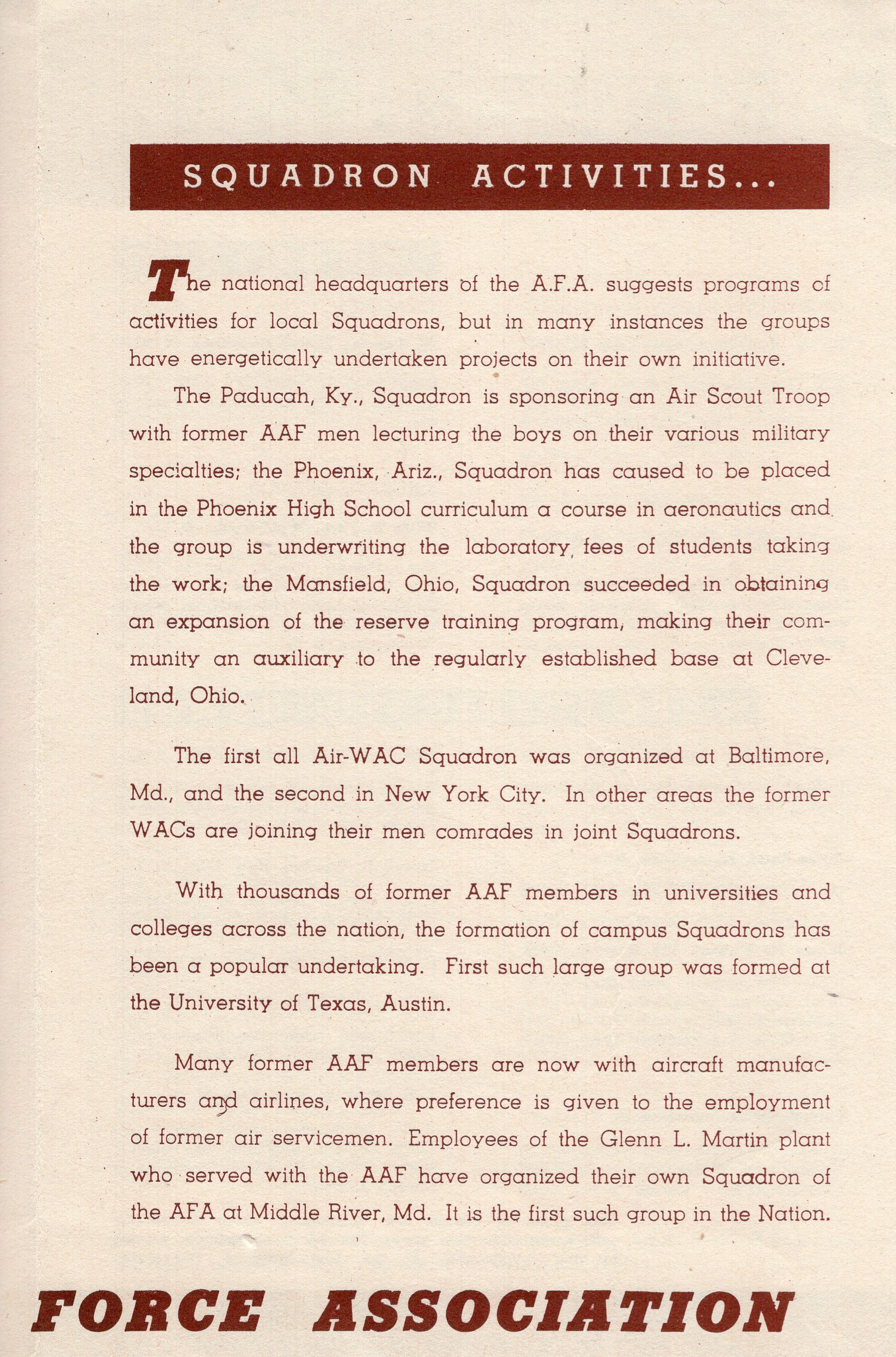 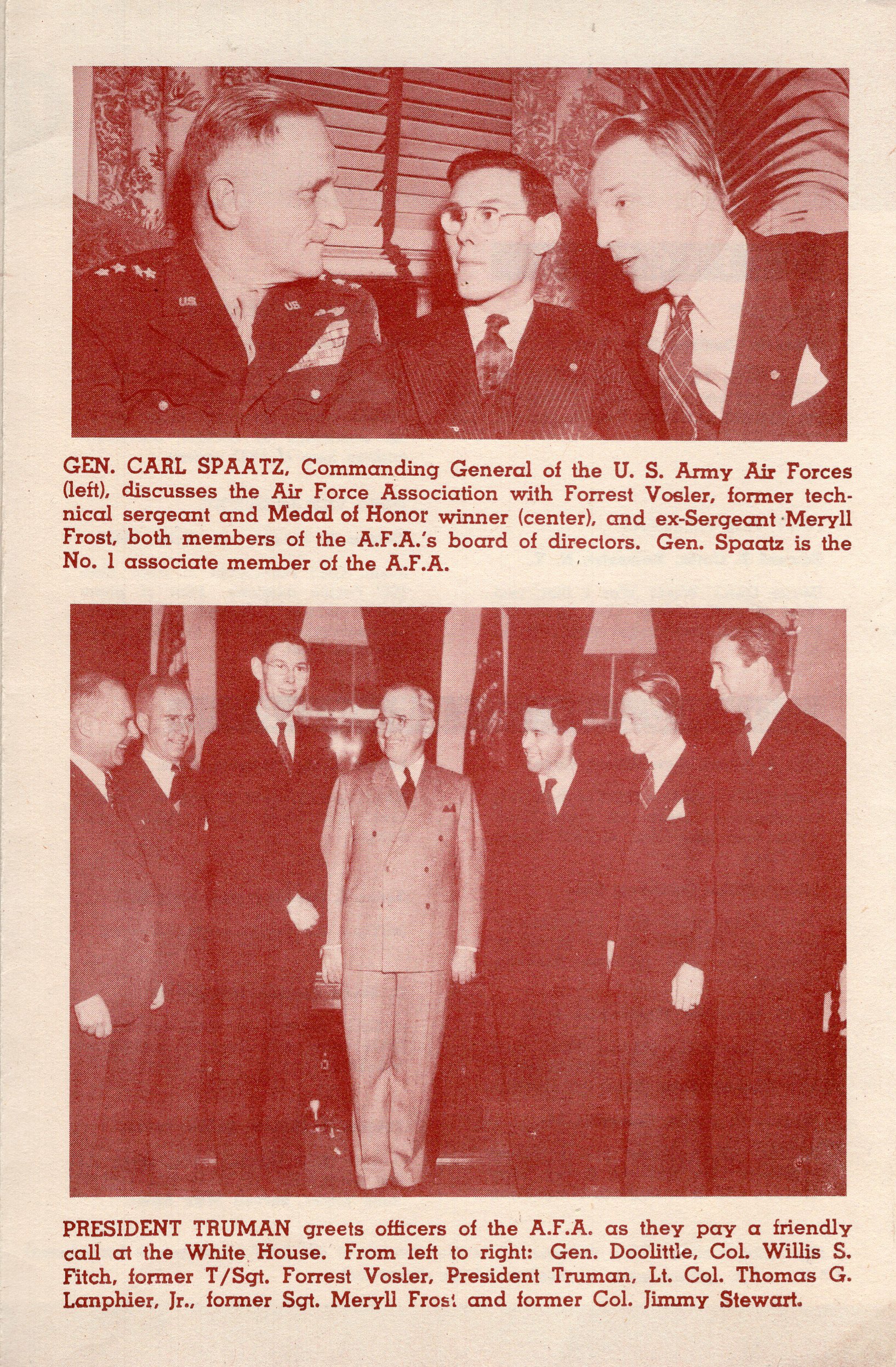 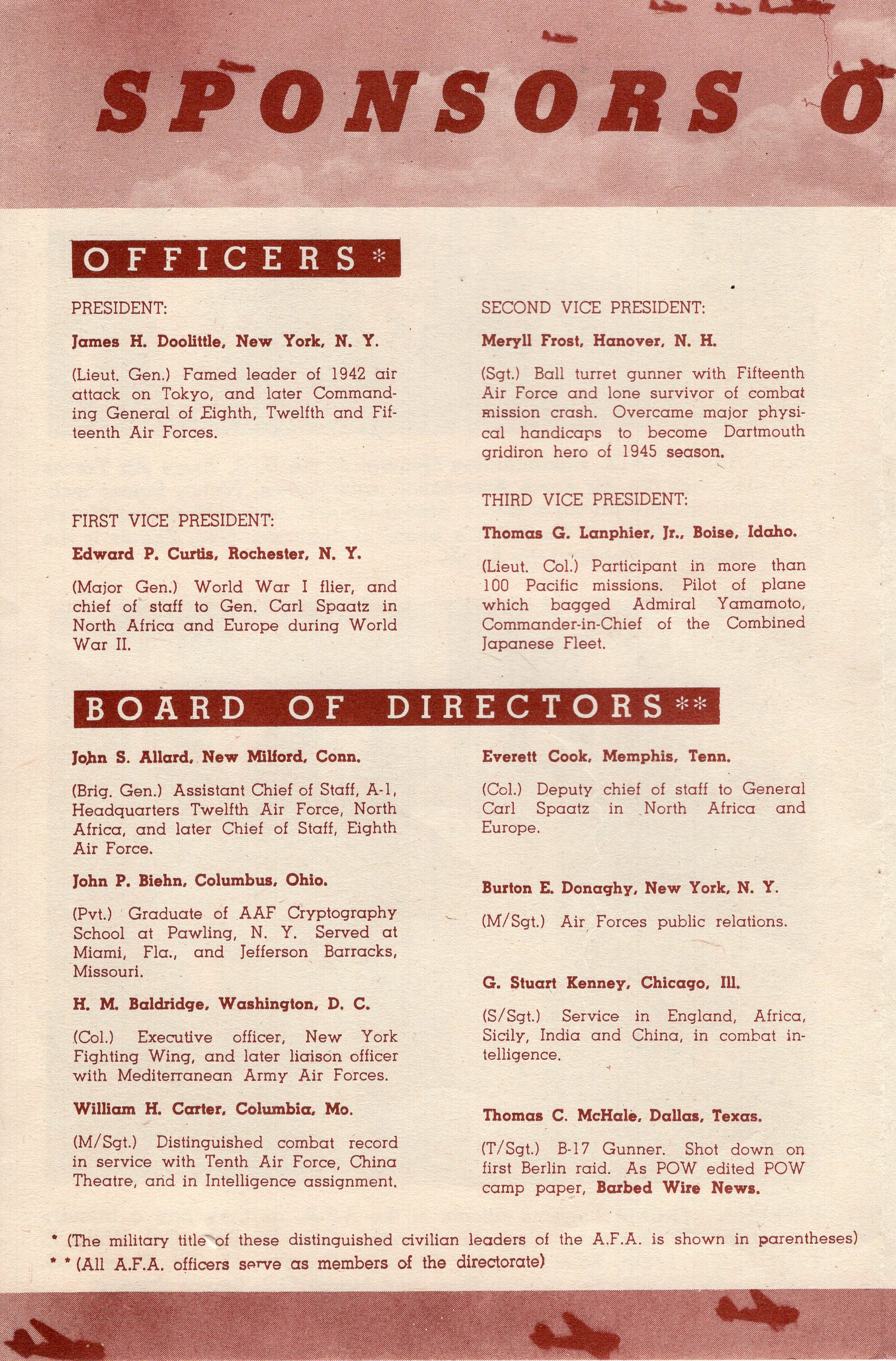 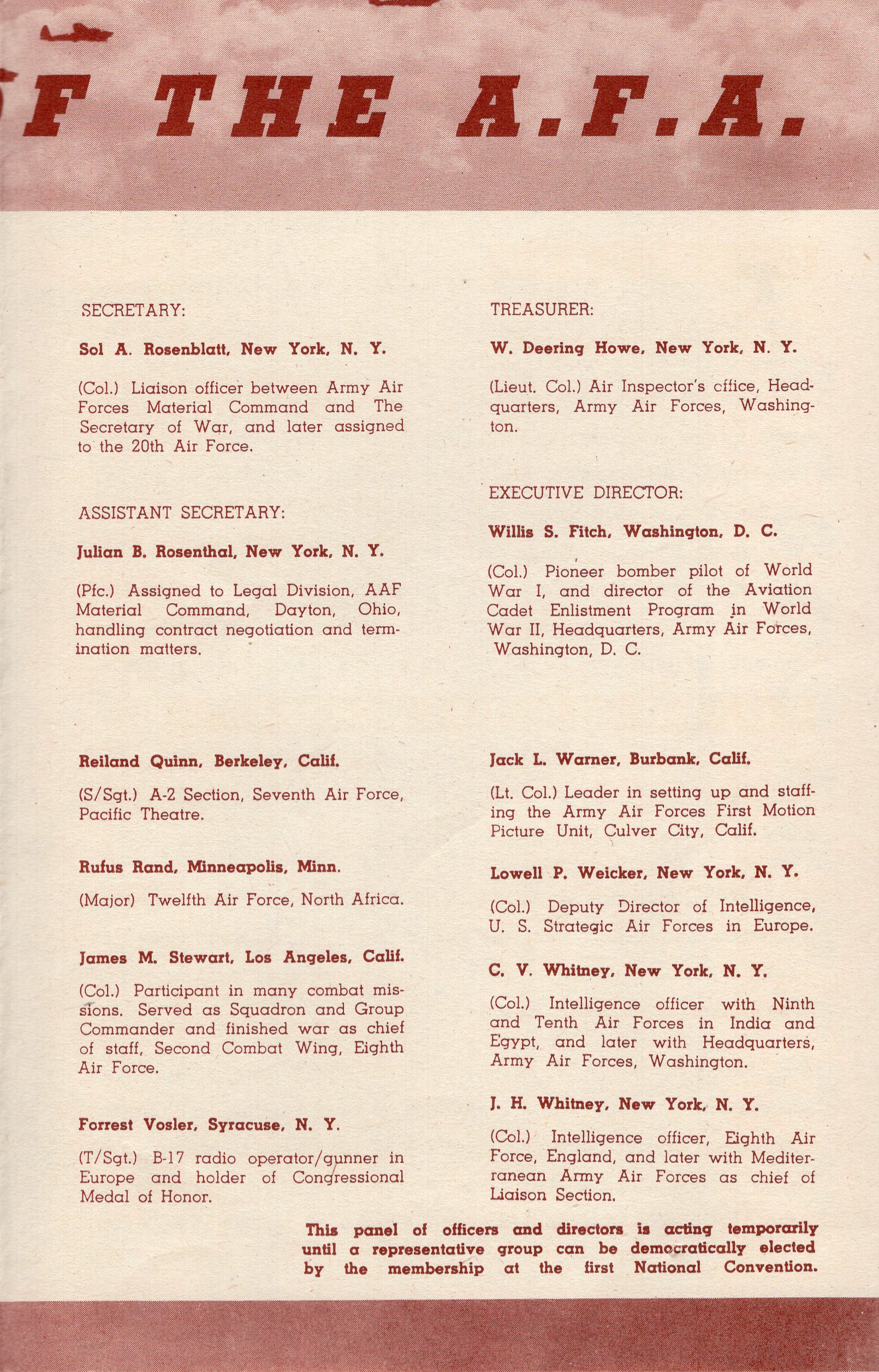 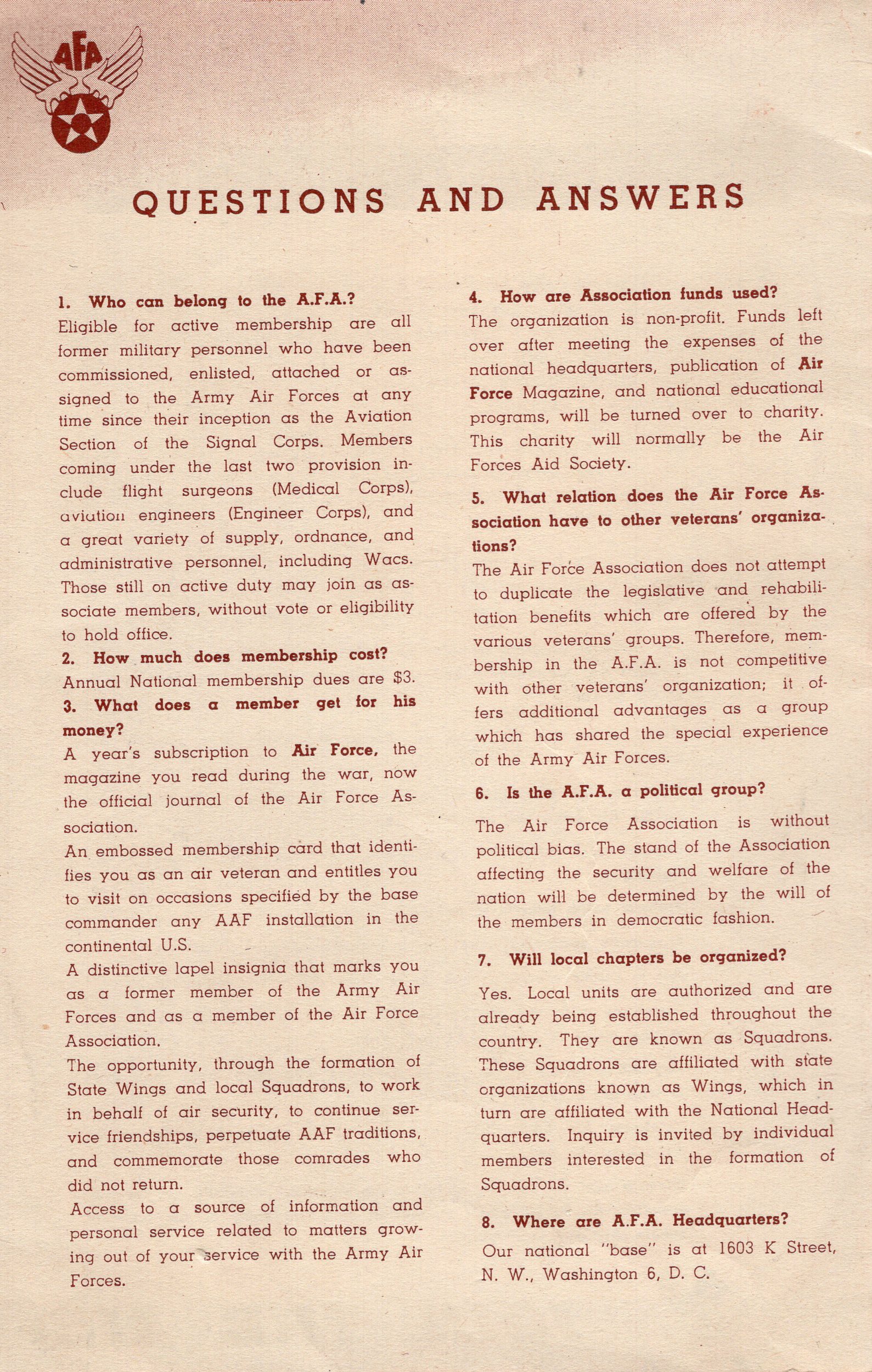