This is a public service program to kick off the annual campaign to sell U.S. Treasury Savings Bonds. The show was carried by most major networks from 10:30-11 p.m. Eastern time. It was produced by William Wilkes and written by Charles Isaacs. Ken Carpenter was the announcer and Robert Armbruster and His Orchestra provided the music (both newspaper listings below give Les Brown as the band leader, but Armbruster is announced on the program).

Here are two examples of newspaper listings for the show. The first is from the Chicago Daily Tribune and the second is from The Honolulu Advertiser. 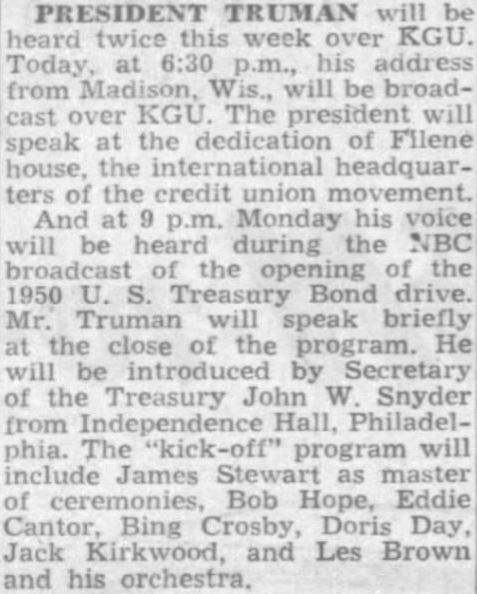 Stewart begins the show by saying.

Thank you, Ken Carpenter. Ladies and gentlemen, 174 years ago on July 8, the people of Philadelphia were summoned to Independence Hall by the incessant and joyous ringing of what we now call the Liberty Bell. There they heard Colonel John Nixon read these imperishable words (from the Declaration of Independence):

“We, therefore, the representatives of the United States of America, in General Congress, assembled, appealing to the supreme judge of the world for the rectitude of the good people of these colonies, solemnly publish and declare, that these United Colonies are, and right ought to be free and independent states.”

And from that day on the very word independence has become synonymous with America. Today, this continued independence, both for you and for your country, can be furthered by your support of the Independence Drive for Savings Bonds. That spirit that carried our forefathers along the sometimes bloody trail to final liberty and independence still lives. And today, when freedom is on trial, we have only to turn for encouragement to the dramatic story of the stalwart pioneer, who with his wife, came to the barren wilderness of America only a few short years after Columbus had discovered the continent. In the tangled underbrush of the dark, unexplored forests, he made his bid for independence.

This leads to the first sketch which stars Bob Hope as Daniel Boone Hope, Doris Day as his wife and Jack Kirkwood as the Indian Chief. The skit is about the settling of Chicago. Hope and Day sing a song to the tune of If I Knew You Were Coming I’d a Baked a Cake, but with special lyrics about buying bonds. Following the sketch, Stewart says:

Thank you, Bob Hope, Doris Day and Jack Kirkwood. To misquote an old phrase, where there’s laughter, there’s Hope. And, where there’s Hope, Bing Crosby can only be putting distance away. Now, a man who’s been dealing in harmonious notes for years is jotting down a couple himself. It’s a lyric with a pretty good moral, so listen closely.

Bing Crosby makes a pitch for Bonds and then sings Dear Hearts and Gentle People.

Thank you, Bing Crosby. You know, we’ve spoken much of independence tonight. Well, have you ever stopped to think that women are more independent than men? It’s true. Three men can show up at a party wearing the same suit and they don’t mind a bit. But, let three women show up wearing the same dress and a cold war starts. Yeah, a woman wants to be individual, and what a woman wants, she usually gets, too; especially when she’s as lovely as Jane Wyman.

Wyman speaks on behalf of savings bonds and then Jimmy returns:

Thank you, Jane Wyman. You know, a few days ago we received a call from the United States Treasury. They had a real tough nut to crack and they asked us if we could find a good bond salesman. Well, without a moment’s hesitation, we recommended a man who we think is one of the foremost salesmen of United States Savings Bonds in the country. In San Francisco, during a 24-hour period, he sold 43 million dollars’ worth of savings bonds. With a record such as this, we’re certain that Eddie Cantor was the proper choice.

Another skit follows, with Eddie Cantor coming to Jack Benny’s house to try to sell him some savings bonds. Rochester doesn’t think he’ll have much luck, but Benny does buy some bonds. He does, however, charge Cantor for his drink. Then, we hear more from Stewart.

Thank you, Jack Benny, Eddie Cantor and Rochester. Part of our American heritage is political independence. But independence has other meanings, too. It can mean financial security, the chance to be free of worry and want. In America, we’ve learned that this freedom from want, freedom from worry…in another word, independence, is within reach. It takes effort, but independence has always taken effort. What we obtain too cheap, we esteem too lightly. These were the words of Thomas Paine back in the day when independence was being purchased in blood rather than bonds. Today, United States Savings Bonds are your key to an independent future. And now, just before we take you to Philadelphia for Secretary Snyder, who will introduce President Truman, we’d like you to hear the sound of liberty. In 1835 the crack appeared which muffled the voice of the Liberty Bell and it has not been heard in over 100 years. But this year, 52 full-scale replicas have been cast in the same process used to make the original and they’ll be carried throughout the country so that everyone may see and hear them. They’re exact duplicates of the first bell, even to the inscription from the Bible around the crown: “Proclaim liberty through all the land and to all the inhabitants thereof.” For the first time since 1835, here is the true voice of the Liberty Bell.

One of the replica Liberty Bells is rung three times, then Stewart ends this portion of the show by introducing the next speaker.

Ladies and Gentlemen, the Honorable John W. Snyder, Secretary of the Treasury.

Snyder delivers a short speech on behalf of savings bonds. He then introduces President Harry Truman who does likewise, ending the show.